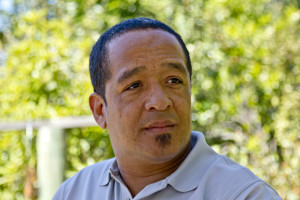 Robert Maja was born in Santo Domingo, Dominican Republic in September 1971 . His talent as an artist was quickly recognized in elementary school and strongly encouraged by teachers and elders. Learning fast from a group of older university art students, young Robert was eventually invited to paint on large projects such as the famous mural at UAS (University of Santo Domingo) where he worked with artist Silvano Lora (1931-2003).

In 1987, at age 16, Robert entered Bellas Artes of Santo Domingo to formalize his art education with a variety of courses including interior decorating, specialty techniques and mural painting. His predominant style of depicting natural Caribbean scenes in vibrant exhilarating color emerged during this time. After graduating, Robert enjoyed three years as the official artist of the Dominican Presidency. In this capacity, he traveled the country creating captivating and inspiring murals at various youth education facilities across the Dominican. These popular murals were officially visited by the Dominican President and reported on in national media.

Robert moved to Madrid, Spain in 2001 where he was determined to deliver the essence of the Dominican Republic to Europe through his bold expressionistic paintings of landscapes and daily scenes. Entering fairs and winning contests, Robert earned broader renown in Madrid and Europe by holding three successful individual exhibitions In just four years. He painted invigorating, childlike images at multiple locations around Madrid and riveting landscapes on murals in Italy and Holland. Robert was also the sole Latin artist helping to paint the mural honoring the victims of the Madrid train bombings of March 11, 2004.

Then, in 2006, Robert moved to the central coast of California to bring his art to America and to continue translating his worldly inspirations into bold, powerful, vivid and emotion-filled artworks.

Over the last few years, Maja has continued to create his art on canvas, public art and in murals.  In 2013 he created an 80 foot, four sided mural in the entrance to the San Luis Obispo Public Library.

Recently, he has especially focused upon images relating to barnyard animals, cigar smoking portraits and cultural scenes.  Many of these can be seen in the gallery of this website.

In February of 2019, fine artist Robert Maja was one of several Dominican heritage Americans recognized by the Dominican American National Foundation (DANF) for their contributions representing the Dominican Republic. The Blue Flame of Achievement award was made to those who have received acclaim for their achievements while in the United States and who have contributed positively to the image of the Dominican Republic. Also receiving the award were Celines Toribio, Zoe Saldana and Cecilia Mota among others. The award was presented at Staples Center in Los Angeles.

Maja has recently had his art exhibited in several shows including the Museum of Latin American Art in Long Beach California and the Hispanic Museum of Nevada in Las Vegas Nevada.

Robert Maja’s Caribbean passion and soul flow through every brushstroke to produce canvasses and murals of bold intensity balanced by gentle emotion. The daily rhythms of island life are conveyed through his vibrant colors resting in a tropical balance between warmth and coolness, high tide and low and the sun and the moon. The voices, songs, and culture of Robert’s Caribbean heritage and his central coast experiences leap from his artwork to enliven the simple joys of living in every heart.